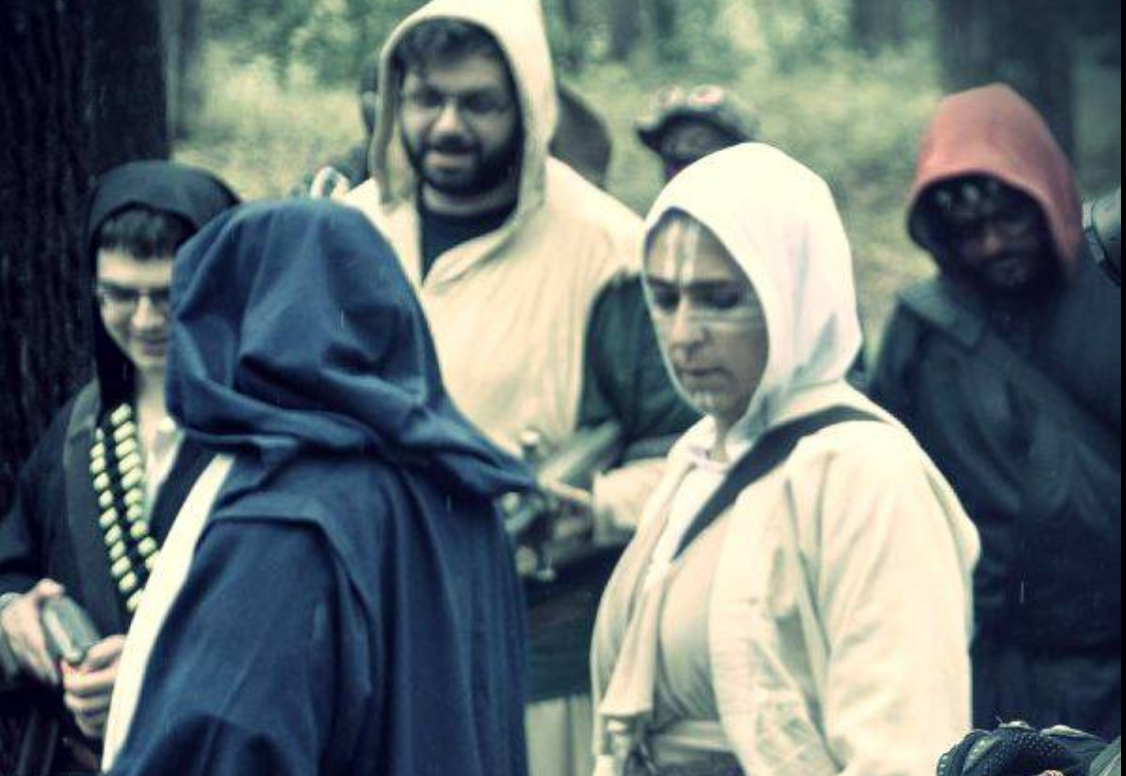 Originally posted at The Space Between Stories. Bold and some links added by editor (Chance) for emphasis.

I’m going to preface this post by saying I have a BFA in theater, have been acting (and studying various forms of ‘method’) for 25 years, was a director for 10 years, and have a lot of LARP feelings about this.

What Americans recognize as ‘Method Acting’ nowdays is not something that can or should be achieved in LARP. Unless you are physically going out and living in a medieval village between games, washing your clothing by hand, eating nothing but the era-appropriate food for weeks ahead, or actually living in In-Game setting and circumstances with your partners/roleplay partners, no LARPer is doing Method as it’s come to be popularly understood in American acting culture. That being said, no LARPer SHOULD be doing method. Ever. It’s a screaming mark of someone unable to distinguish between character and player, it is a mode of acting made specifically to promote and induce what LARPers call ‘Bleed’, and it’s psychologically damaging on the long term. Method was made for short term theater, and even then it’s questionable. The closest thing I did to ‘Method’ LARPing was the fully simulationist game of 1942 and I definitely came away from that mentally fucked up for a few days.

I suspect what people are referring to when they talk about ‘method’ acting in LARPing is actually closest to the Meisner Technique. Meisner is what I studied as a teenage actor into my degree, and is often considered one of the most emotionally ‘true’ techniques out there right now. It relies on the actor’s mind giving a true emotional response to fiction. As Meisner said: “living truthfully under imaginary circumstances”. This is what a lot of LARPers do. This is still what can cause bleed for inexperienced LARPers who are not accustomed to putting character and emotions away at the end of the weekend. Doing it long term, the way most LARP campaigns are run, can almost develop a secondary emotional life for the person playing the character. There are definitely psychological risks.

This being said, I feel like this style of LARPing is intriguing, compelling, and can really create deep, fascinating story ONLY if a LARPer can do the following:

In truth? This is still how I LARP. I get into the character brain and, for that weekend, I let them take over. However, when I leave game, I make VERY STRONG EFFORTS to only talk about my character in the third person (never “I,” only “She”), to debrief the emotions if I need to, and to check in out of game with other players. I do favourites as a way to workshop and separate from the game, putting that story in a place of closure so I can focus on my real life. For LARPers who are still learning the craft, perhaps not in psychologically healthy places, or have strong issues with bleed, I do not think the Meisner/Method style of LARPing is necessarily healthy for them. It’s better to built a character from the outside in, and play characters far different from themselves, in efforts to keep the game in game space and not have it emotionally spill into your real life.

Even if/when we are playing pretend, it is real. Our bodies are still going through these emotional reactions. We are still processing all these hormones, emotions, exhaustion, heart racing, goosebump causing things. Our bodies do not know that, in the moment, this isn’t real. So, without specific tools, methods, or a very strong head/personality, it is VERY EASY for method-style LARPing to take over a person’s real life and I definitely see it a little too much in the communities around us. It pollutes even further when someone’s real life isn’t ideal (bad or no job, poor family life, etc) and they get to be big, powerful, important, loved in a game. Of course their body would rather spend time in the game world than the real world, and it can become very much an addiction under these circumstances. This is why, while people are rolling their eyes at the debrief discussions happening in the US community now, I really push for optional debriefs in any game where I have any power. Some people need that tool.

TL:DR — I love ‘Method/Meisner’ style LARPing when it’s done in a healthy manner, by someone ready to handle the after effects, and people take the proper debrief (if they need it.) But, it’s not a technique to be handled lightly. It can quickly develop into an emotional addiction and unhealthy out of character space where bleed is constant and difficult to break.

(If you liked this post, please consider supporting my Patreon so I can continue learning, designing, and supporting LARP across the world. Space Between Stories, a LARPing Patreon. Even one dollar a month gets you previews to these posts and includes you in the conversation before they go public!)

For more of Ericka’s thoughts on player safety, check out her excellent post (Negative) Bleed and You…